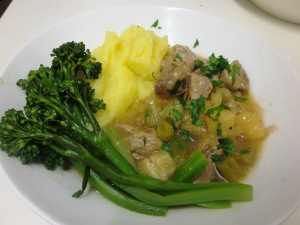 My freezers are now full with lots of pre-cooked (or ready to cook) meals that I have made in the last few weeks preparing for the arrival of my first baby, including this recipe. I love cider but even before I was pregnant, I couldn’t drink alcohol as it always gave me a migraine no matter what I drank – even one glass. The drink that I miss most is cider, so I’m always interested in new recipes that include cider as an ingredient. This is a great dish for winter, it takes a little time but the oven does most of the work for you. Depending on the size of your pork and vegetable pieces, it could take a bit longer to cook than the recipe states. The original recipe results in a very thin sauce, even after I reduced the amount of liquid in it. So if you want a thicker sauce add more flour at the beginning or a bit less liquid. However I didn’t mind as it was soaked up in my mashed potatoes. Potatoes were one of the few things I could eat during the first four months of my pregnancy. You’d think I’d have had enough of potatoes after that but they are still one of my favourite things to eat.

Click here for pdf version of the recipe to print 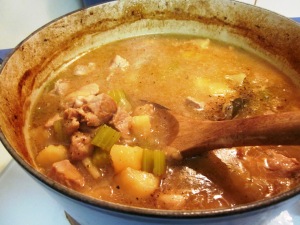 One thought on “Slow braised pork shoulder with cider and parsnips”