I have to admit I don’t deal with summer heat well. I much prefer cold weather as I find it is so much easier to get warm than it is to stay cool. I love rugging up on the couch in the middle of a thunder storm, with a cup of tea (and maybe a nice baked item) and a good book. Plus winter is great soup weather.

Soups are also great meals on the run, whether at work or between work and racing off to rehearsals when I’m in a show. I like to try new soups in winter so that I keep things interesting and don’t get sick of one soup.  So when I was looking for my latest ‘my cookbook library’ recipe, this new soup fit the bill.

I like this recipe as it is very simply to make, full of vegetables but filling with the addition of the butter beans. This makes a huge pot full and I have placed a few serves of it in the freezer. I will update this post once I’ve tried it after freezing. This recipe could easily be made vegetarian by omitting the pancetta and using only vegetable stock. Cut the vegetables as fine or large as you like (however the larger you slice them, the longer they will take to cook). Don’t be put off by the long list of ingredients. Once everything is chopped, the actual cooking of the soup is easy and only a few steps.

Number of cookbooks owned: 200+ (I didn’t cheat, I got given two by my lovely French teacher as she couldn’t use them any more as she no longer eats meat)

New book credit: 0.8 (1 more to go before I am allowed to buy another cookbook)

END_OF_DOCUMENT_TOKEN_TO_BE_REPLACED

I had a good time on my holidays and I ate a lot of really great food. However, after all that eating out, it definitely felt like time for some healthier home cooking.

This recipe is adapted from a recipe I saw a few years ago on an Australian TV show called Good Chef Bad Chef. The format of the show has a normal chef, who cooks rich food that isn’t always good for you and a nutritionist who cooks healthier dishes, cooking different dishes based on the same theme.

This dish is adapted from Good Chef Janella Purcell’s recipe. I’ve changed it slightly, using some different vegetables, extra beans to make it stretch further and goat cheese both for its creamy taste and to make it more filling. I also sometimes like to vary the dressing and have included both the dressings I use. You can use whatever vegetables you like really. The recipe is really just an idea that you can adapt to your preferences or what is available. Other vegetables I have used besides those I have listed in the recipe include baby beetroot, leek and baby spinach (added at the end).

The leftovers are also great cold as a salad or wrap filling for lunch the next day. 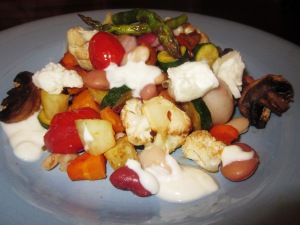 END_OF_DOCUMENT_TOKEN_TO_BE_REPLACED

This is one of those dishes that has developed over time and is now one of my weeknight favourites. I remember trying the lamb with dukkah for the first time after buying some dukkah in Margaret River several years ago and wanting to find other ways of using it rather than just as something to dip your bread into. Though I love eating it like that too – cut up some crusty bread or Turkish bread, dip a piece of bread into a small  bowl of olive oil and balsamic vinegar and then into some dukkah…yum. The couscous and ratatouille were added later after I met Jerome and he asked me to cook couscous. The couscous needed something with some liquid to go with it, so I decided to try a ratatouille. Like usual, I looked up a few recipes then proceeded to go off and make my own version. My ratatouille is quite fresh and light, and only needs around 25 minutes total cooking time, making it good for a weeknight meal and one of my favourites.

END_OF_DOCUMENT_TOKEN_TO_BE_REPLACED

The last week has been a very busy one, with lunch and dinner out for my birthday, a cooking class (Yule log), two cake decorating classes (which I will post about when I get back from my holiday) and all day Sunday baking for work morning tea (cupcake recipes to come soon). And now I am in the middle of packing for a few nights away. As a result, there hasn’t been a lot of extra time for actual home cooking or writing about it.

However, I did manage to try two new recipes this week. Jerome asked for Tomates farcies (stuffed tomatoes), but with rice in the filling. Normally when trying a new recipe for something specific (rather than a recipe that I see and want to cook), I do some research and look at a number of recipes before I cook, using what I like from each or taking the general “rules” and making up my own. Not having much time, I used the first recipe that I found which was in Manu Feildel’s Manu’s French Kitchen. I was lucky enough to have the book signed by Manu last year. Also in the book was a recipe for baked witlof,  so I decided to try both for dinner. I couldn’t get hold of any minced pork at my local shop, so I used the filling of some pork sausages instead. And instead of breadcrumbs and egg I used a cup of rice (as this was what Jerome asked for). I also replaced half of the tomatoes with mushroom cups for a bit of variety. The filling ended up a bit heavier/denser than I would have liked but they still tasted nice – I’m not sure if that is because of the sausage, lack of breadcrumbs/eggs or just me packing it in too tight.

My witlof was very bitter and I really needed to keep tasting the sauce as I went to adjust the seasoning and sugar. Don’t put extra in though until after you have reduced the cooking liquid, or it will end up too sweet. The end result was quite nice and Jerome liked it. It didn’t look very pretty in its baking dish though and I’m afraid I don’t have a photo, however I will try it again and update the post with a photo when I have one… After my upcoming trip that is. 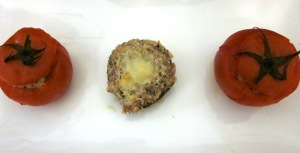