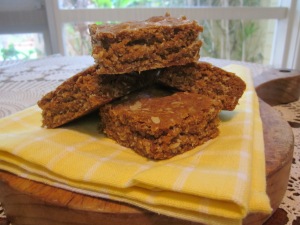 END_OF_DOCUMENT_TOKEN_TO_BE_REPLACED

Time for the last of my trio of Christmas gifts from my kitchen. This year is actually the first time I have made gingerbread at home as an adult, and I have to say I am very happy with the results. Not only does it taste nice, the gingerbread Christmas tree worked wonderfully, and the stars, snow flakes, angels and other shapes looked lovely decorated with royal icing.

The recipe below can be used to make whatever shapes you want out of gingerbread. You are only limited by either your imagination, or whatever cookie cutters you may have on hand.

To make a tree out of gingerbread, you will need several star cutters in different sizes. For my larger tree I used 9 cutters ranging from 2.5cm (top stars) to 18cm in size. For the smaller one I used 5 cutters from 2.5cm to 9cm. You cut two stars out in each size. After they are baked and decorated (edges only), you stick them together with royal icing, alternating the positioning of the star so the points are in the gaps of the previous star. From two batches of this dough I got a small and a large tree, and lots of other shapes. I decorated my trees with bought decorating icings and gels, as they were decorated by my team at work. However at home, I decorated the gingerbread with white royal icing, which I prefer as it sets firm.

END_OF_DOCUMENT_TOKEN_TO_BE_REPLACED

Some days, things just go right in the kitchen. They certainly have for me this last week while I’ve been blogging. New recipes worked first time and my first attempt at pastry turned out pretty good. But sometimes, like today, things just don’t work. I like to think that even the best of chefs have baking disasters occasionally. Not that a failed recipe in the kitchen really is a disaster in the scheme of things. But this afternoon baking, things just didn’t seem to want to go my way.

Last week just before heading out for my first cake decorating class, I was skimming through one of my books and came across a recipe for ginger and lime kisses (two little ginger cookies with a lime butter-cream filling). I thought they looked and sounded nice so decided that they would be my next weekend baking project. They didn’t quite work out. While I followed the recipe, they spread too much, didn’t rise and just didn’t look like they should have. I think I may know what went wrong, but I’ll get to that in a minute. They still tasted great, so I have frozen them and might make ice-cream sandwiches with them or a twist on cookies and cream ice-cream another day.

Determined to still have something baked to post, and share, I decided to make some Anzac biscuits. 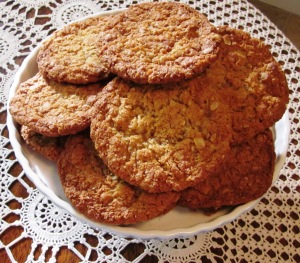