My little boy is now eight months old and is a lovely, friendly smiling little boy most of the time (though we are teething at the moment so we have a lot of Jekyll/Hyde moments). I’ve recently found myself doing quite a lot of cooking that then gets pureed or mashed and frozen for him, but not so much cooking that involves trying new recipes for me.

However, I have been taking part in a cookbook club that I started with a few friends after we were inspired by this article (click here to read). What is a cookbook club? It is a group of friends (or a group of people who love to cook and/or eat) who meet up regularly to share food they have cooked. At each meeting, everyone brings along a dish cooked from the same cookbook (chosen in advance so you don’t replicate dishes). It is a great opportunity to try dishes you might otherwise not have cooked, as well as using the cookbooks you own (or discovering new ones). You also get to meet new people (friends of friends) who you already know have a shared interest in food, cooking and eating! END_OF_DOCUMENT_TOKEN_TO_BE_REPLACED

My weekends at the moment are filled with Christmas baking and I find that when I am spending a lot of time baking sweet things I often forget to eat properly. I am so surrounded with the sweet smells (and tastes, as I have to check for quality!) of baking that I don’t always eat properly. Plus with all of my (limited) kitchen benches taken up with baked goods at different stages of the cooking process, it can be a hassle to clear it all away to prepare lunch or dinner.

So this weekend, before I started baking, I made a big batch of prawn linguine to last me for the weekend. I love prawns however Jerome doesn’t like them, so I rarely cook with them anymore. However he is currently away visiting his family for Christmas, so I can make as many prawn dishes as I want! The other night while I was trying to find something on TV, I saw this recipe on Better Homes and Gardens and it was exactly what I was looking for. It is quick and easy to make but delicious. I cut back on the amount of oil to make it lighter (I used more of the pasta cooking water instead to help the sauce come together) and added extra prawns. It was great reheated the next day as well. Make sure you have all your ingredients ready to go before you start, as this cooks in a flash.

END_OF_DOCUMENT_TOKEN_TO_BE_REPLACED

I like filled pastas such as ravioli, tortellini and angolotti but I don’t like buying the pre-made versions of these as I have no control over what has gone into the filling, and I often find they are too salty for me. So I was really looking to going a class at Matters of Taste to learn how to make these types of pastas.

This was another technical class where we learnt how to make the pasta and the three different filled shapes, and we each got try making each of these shapes. I was a bit nervous about trying the tortellini but found it easier than expected. As a group, we also made three different fillings and sauces (with each group of three responsible for one sauce and filling). I had a lot of fun and left filled with confidence about trying these at home.

The next night, I decided to make the mushroom and goat’s cheese tortellini that I had recently seen on Masterchef – The Professionals. I used the pasta recipe that I learnt at Matters of Taste rather than the one from the Masterchef recipe, as I am now familiar with that recipe. However, as that isn’t my recipe to share (having received it at a class) I have included the Masterchef recipe for pasta below (the only real difference was my recipe used three whole eggs only and slightly more flour).

Making pasta at home by yourself is quite time consuming and is definitely not for every night. I found this filling a bit difficult to use as it didn’t hold together well, but that may be because I added the goat’s cheese at the end as I’d seen on TV rather than mixing it through as the recipe stated. I was still happy with the results and loved the creamy goat’s cheese with the earthy mushrooms and silky soft pasta. I’m not a huge fan of the brown butter sauce however, so next time I think I’ll try a different sauce.

END_OF_DOCUMENT_TOKEN_TO_BE_REPLACED

No matter how much you think you may know about cooking, there is always some new trick or technique that you can pick up from a cooking class and I continue to learn new things whenever I go. You can read about the technique of pasta making, for example, but until you actually feel the pasta dough, you never know exactly what the end result feels like for the best pasta. Over the past few months I have attended a few cooking classes from cake decorating to meat butchery and thought it was  time I shared them with you, before I head off to the next one tomorrow.

END_OF_DOCUMENT_TOKEN_TO_BE_REPLACED

I was thinking about where the recipes we cook come from the other day. Some are passed down through families for generations. Others we learn from friends, discover in recipe books and magazines, on TV shows or these days through the numerous websites and blogs now available to us. Others just develop from an idea. This recipe is one of the latter. I make no claims to it being a traditional pasta dish (in fact, I recall an Italian cook/chef noting at a demonstration that cream and pesto together in pasta was very wrong). However, it is a regular household favourite and wrong or not, I love it. I’ve even had an ex ask me for the recipe after we’d broken up!

The original idea came from watching an episode of Ready Steady Cook one day when I was home sick from work several years ago. One of the cooks made veal with a cream and pesto sauce and observed that the sauce was also good with pasta. I decided to give it a go and over time it developed into the dish below. The meat component depends on what I have in the fridge (or can be omitted altogether). This time I had some chorizo (I use this in it quite a lot), other times I’ve made this with leftover cooked chicken, or some pancetta or bacon. I’ve also used the same method to make a chicken and roast pumpkin pasta, but without the pesto.

I originally made this dish with cream. However, that isn’t the best for a regular weeknight dinner. I was amazed the first time I tried this with evaporated skim milk and corn flour in place of cream. The result is just as creamy and delicious. Another success in my quest to find ‘healthier’ replacements.  I haven’t made this with cream since. If you do want to make it with cream, just replace the evaporated skim milk and corn flour with about 200ml of cream. I have even made it without any milk/cream component at all, and just used some of the pasta water to create the sauce. But whichever method I use, I’m always happy with the results. 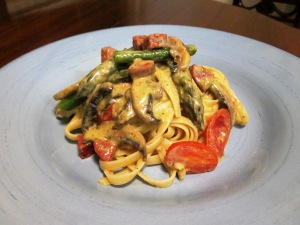 END_OF_DOCUMENT_TOKEN_TO_BE_REPLACED

After years of making spaghetti bolognaise from a jar, I recently started making my own at home. I make a big batch and freeze the leftovers. It is certainly not a traditional or authentic recipe. Doing what I often do when I want to try a new dish, I looked at different recipes for inspiration and then went of and started cooking and adding things myself, such as mushrooms and Worcestershire sauce. Neither are traditional ingredients, however I love mushrooms in this sauce, and for me the Worcestershire sauce just adds something. I always add it to my home made hamburgers and just added it automatically the first time I made this.

This recipe is something I taste as I go and make adjustments to at the end if needed (salt/pepper, maybe some more vinegar). Depending on the tomatoes you use or the sweetness of the red wine, you may need to add a small amount of sugar at the end to overcome some lingering tartness/bitterness. However I have only needed to do this one and only needed to add a small pinch. While it does have around 3 hour cooking time, most of that is taken up with the sauce slowly simmering away on the stove top, with the most you need to do is stir and taste occasionally. It’s certainly not something you want to make on a busy work night, but it’s a great one for an afternoon of cooking on the weekend. You can chop the vegetables quite small or keep them a bit larger if you prefer a chunkier sauce. It’s really up to you. END_OF_DOCUMENT_TOKEN_TO_BE_REPLACED