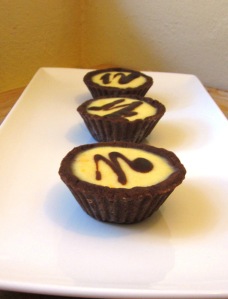 As I’ve mentioned many times before, I’m not that fond of chocolate (strange I know). I will always bypass a chocolate dessert for something made from citrus or berries. If I am going to eat (or bake) something with chocolate, I need something added to it to cut through the richness of the chocolate.

When I saw the cover recipe of the March BBC Good Food magazine, with the classic combination of chocolate and orange, I knew it was something I wanted to try. And with a house warming to go to this weekend, it was the recipe for me.

The recipe in the magazine used store bought sweet crust pastry, with cocoa added to it in a food processor to make a chocolate pastry. I decided I had to make the chocolate pastry from scratch. Not the best plan when you only have a few hours to make the whole tart at the end of the week and the house/kitchen is boiling hot (it is a warm summer here in Perth). But I persevered. If you can give the pastry a couple of hours in the fridge it is much easier to work with and you can roll it a bit thinner. I had to make it a bit thicker as it wasn’t quite cool enough when I rolled it…but the end result was still good. I also wanted to make small individual tarts as I thought that would be easier at a house warming than a large one that needed to be cut.

The filling for these is almost like a cross between a curd and a custard. Don’t take your eyes off it when it is on the stove. I went to check the pastry and it started boiling and almost curdled. Thankfully it still worked and the end result was a good combination of the rich chocolate from the ganache drizzle and pastry, and the sweet tartness of the oranges. I used my favourite ganache recipe instead of the one in the magazine which had the addition of golden syrup as I thought this would be too sweet. The recipe below has more ganache than you’ll need to drizzle on top of the tarts. However I had extra pastry so I made more tart shells and filled the rest with the ganache for rich chocolate tarts with a hint of orange in the pastry and ganache.

Makes 12 mini tarts  (I used a tin that makes 12 fluted tarts – like a cupcake tin but for tarts) with some pastry left over. Or one large 23cm tart.

9. To make the filling, place the 250ml of strained orange juice into a saucepan. Add the cream, combine and bring to the boil. Remove from the heat once boiling.

10. Meanwhile, in a large bowl, whisk together the eggs and sugar. Once the cream/orange juice has come to the boil, slowly add the hot cream mix to the eggs/sugar, whisking continuously. Once it has all been combined, return to the pan (wipe out the pan first) and place it over a medium heat. Cook for about 5 minutes until the mix is steaming and coats the back of a spoon (don’t boil the mix).

11. Strain the orange custard into a jug, whisk in the orange zest and then pour into the cooled pastry cases. Allow to cool before placing in the fridge to chill for at least 4 hours or overnight, until set.

12. Once set, make the drizzle by melting all the ingredients together. I did this by bringing the cream to the boil and pouring it over the chocolate and then mixing until combined and glossy. Add the liqueur if using and mix to combine. Drizzle over the tarts and then return to the fridge. If like me you have extra pastry left, make more tart shells and fill these with the leftover chocolate ganache for a rich chocolate tart. 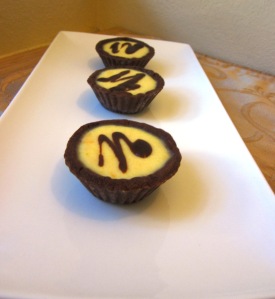 Note – if you don’t want to use your own pastry, the BBC good food magazine recipe recommends placing bought sweet shortcrust pastry (375g) into the food processor with 2 tablespoons of cocoa powder and processing until it was combined then kneading to bring together and then using as above.

5 thoughts on “Chocolate and orange tarts”