I have a confession to make. In April this year I set myself the challenge of not buying a new cookbook until I had cooked a recipe from five of my current cookbooks. It was going quite well for a few months and I also discovered the huge cookbook collection at the library next to my work, so I could borrow and look through as many cookbooks as I wanted, without buying them.

Then a couple of things happened. First, I went to France in June, and told myself a couple of very small regional cookbooks in French didn’t count as they were “souvenirs”. But that was only the beginning.

Then I went to the Perth Good Food and Wine Show in July, and I just couldn’t resist the chance to meet the cooks/chefs there and get a book personally signed (I owned some that I could get signed, but there were a few I didn’t have). Plus there were a few books on sale at the show (I mean, $10.00 instead of $50.00! What would you do?). And you never know what might happen, a few words with Maggie Beer about music/singing while she was signing my book (thanks Mum) and the next thing you know, she is calling up “Sarah who sings” to cook with her on-stage an hour later, and sending me home with a big box of her products!

I bought a few books over the next few months (always on sale), and then came the Margaret River Gourmet Escape a couple of weeks ago, where there was the opportunity to meet more incredibly inspiring and creative chefs, including Heston Blumenthal (who’s book I actually won in a competition a few months back, or I would have been buying one of his books too – you should have seen how excited I was when I found out I’d won a cookbook! Then actually getting it signed by Heston!!!).

So I have to admit that I failed my challenge completely. But I do now have another eleven signed cookbooks in my collection, more inspiration and hundreds of new recipes to try, as well as the memories of meeting these amazing Australian and international cooks and chefs that inspire me.

But moving on, it is time to try again. I think I have bought enough cookbooks to last me quite a while, so let’s see if I can cook through five of them before I even think about buying another cookbook. I can do this. After all, it’s almost Christmas and it doesn’t count if it’s a present…right?

So back to cooking. This is the recipe that convinced me to buy The Blue Ducks cookbook. By 5pm on the Saturday at the Gourmet Escape, I was starting to fade after a day in the sun, but looking through this book again (which was the last book signing of the day), I gave in and bought it. This recipe for Mushrooms and Pearl Barley with Macadamia Bread Sauce just jumped out at me and I had to try it. I have since found the recipe is on the SBS website here. But having discovered other recipes in the book I also want to try, I have no regrets.

I’m not sure about the bread sauce, I found it a bit too heavy and if I was to make it again, I would thin it down even more. But I liked using pearl barley instead of rice or couscous for a change, it was very filling and had a nice nutty flavour. I think I’ll try using it more in salads for work lunches. 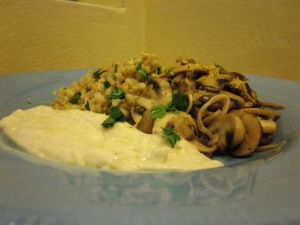 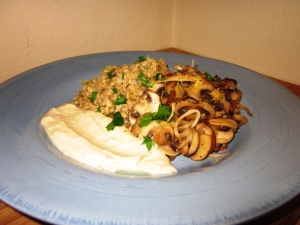