Although I love cooking and baking, bread making is a skill I have not yet attempted to master. The only bread I have ever made at home is naan bread. And while it worked quite well, I’ve only made it once and that was probably seven years ago.

In an attempt to correct this omission, I have enrolled in a bread making class at Matters of Taste. However this class is still a few months away. So yesterday, given it was Good Friday, I decided it was time to make a start and give hot cross buns a try.

Most people probably think that hot cross buns, with the cross representing the crucifixion, are solely a Christian tradition. However, apparently (thank you google) the ancient Greeks marked buns with a cross. There may also be connections to the goddess Eostre (Easter – get it?), who is the namesake of the festival of Easter and is where the custom of bunnies (hares) and eggs is thought to have come from.

Anyway, I went looking for a recipe to try and really liked the sound of these hot cross buns (recipe by Paul Hollywood from The Great British Bake Off) with the addition of orange zest and apple. I left out the citrus peel (I don’t candied peel) and added some mixed spice. Don’t be put off by how sticky the dough is to start with. A dusting of  flour and a few minutes of kneading and it all comes together. I have to say I was very proud of my first attempt at hot cross buns, although I now know I need to place them closer together next time, and I think baking them at home on Good Friday is an Easter tradition that I will continue. 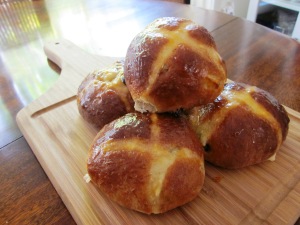 One thought on “Hot Cross Buns”