After my fairly unsuccessful attempt at Jamie Oliver’s 15 minute mushroom soup, I still had some mushrooms, parsley and thyme left over in my fridge. And a desire to make something that I actually wanted to eat once it was cooked. I also had some leftover bacon as well that needed to be used up.  Not wanting to waste these ingredients I set about finding something I could cook with them.

I didn’t have to look far. Hugh Fearnley-Whittingstall’s latest TV cooking series from River Cottage (and associated cookbook of course) is called 3 Good Things. It is based on the premise that all you need for a great dish is three great ingredients that work well together. Each episode has Hugh competing with two other chefs to cook the best dish created out of the ingredient of the day, with each chef being able to pick the two other ingredients to go with it to make 3 Good Things. Basic seasonings, herbs etc are allowed in addition to the three main ingredients

Episode 4 was based around the theme of mushrooms and Gill Meller matched the mushrooms with pastry and pancetta to make a simple mushroom tart, with thyme and parsley used as well. I always have some puff pastry in the freezer, and pancetta can be easily replaced with bacon. Perfect, a recipe for lunch to use up my leftover ingredients was found and after picking up a few more mushrooms (I bought a tray of different gourmet mushrooms to go with the swiss brown/button mushrooms I already had) I was ready to cook.

The recipe, although taking longer to cook than the 15 minute meal mushroom soup, needed a lot less of my time and energy to make. A few minutes chopping and frying and then it was all in the oven. Easy. Which was just as well as I was starting to get a migraine. The end result tasted great (although I couldn’t eat it until later in the day once my migraine was gone), and I felt redeemed after the mushroom soup disaster.  I didn’t feel like eating much that night after my migraine, so it was a perfect light dinner, while Jerome had it earlier in the day as his lunch. 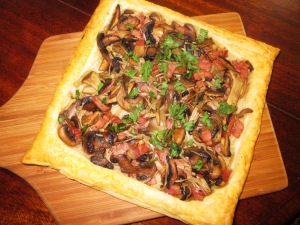