This weekend, I attended a cheese making class in the Swan Valley with my Dad, run by The Cheese Maker, which was a Father’s day present for Dad. In the class we got to make our own Camembert to take home as well as learning how to make cream cheese, quark and mascarpone (which seem surprisingly easy). Aside from the starters, rennet and calcium chloride that you have to add in small amounts (depending on the cheese), all of the cheese are made with shop bought milks and creams, so they are possible to replicate at home. I really enjoyed the day, and I think my Dad did too.

Warming the milk and cream with calcium chloride

Dad and I were in different groups (each group of 4 did a batch), I made a white camembert while Dad made a blue one (the only difference is the mould spores you use). The photos are from my group.

We had a lovely lunch (cheese board – I liked the cheese so much I bought them to take home) which was included in the class cost. We also got to taste a cheese from a previous class and it was surprisingly good, so hopefully our’s will turn out just as well. 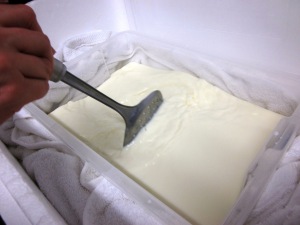 Mixing in the starter culture

The class is held at The Cheese Barrel which recently opened in the Swan Valley, where you can choose from some wonderful imported cheeses to eat in the café or buy and take home. They have mostly cheese from France, Italy and Australia, however they also have cheese from England, Ireland, Spain and America (to name a few) I bought a few to take home to share with Jerome…seeing as my Camembert won’t be ready for another 4-5 weeks.

Although quite time consuming, there wasn’t anything too difficult about the Camembert process once you know the steps. You need a solid day to do the main part of it, but there is a lot of time in between waiting for things to develop or rest (in which we had morning tea, lunch, afternoon tea etc), so it is achievable on the weekend. Dad got me the complete kit to make Camembert at home as an early birthday present, and seeing as I now have the kit I am now looking after both his cheese (which apparently is called Oliver) and mine for the rest of the process (brining, drying and maturing). Dad is going to come up and help when I try to make it at home, which is good as there are some stages where you really need two people. Plus it will be nice to make it with my Dad.

I’m looking forward to trying the cream cheese at home and using it in my lemon and lime cheesecake. I will post it when I do. I also brought some of the whey home and I’m going to try it instead of buttermilk in my gluten free lemon, berry and poppyseed muffins. I’m planning to make them for breakfast on the run for this week, which is good given this is my busy week of classes. Still to come this week:

Not to mention work (though I’m having a couple of days off this week) and birthday dinner at Bistro Guillaume at Crown Perth. It’s going to be a very busy week!

Update on the cheese – they have been brined, aired for 24 hours to dry and then placed in a large foam box in humidifiers (for ten days) and turned a few times. Currently at day 6 had the blue camembert has turned blue, and the white has developed a thick layer of white fuzz – just like they are supposed to. 4 more days until they get wrapped up then into the fridge for 4 weeks. 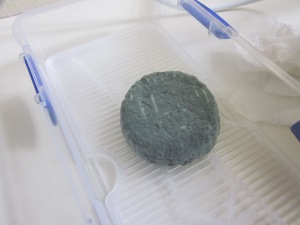