Although I watch a lot of TV cooking shows, I’ve never really liked watching any of Gordon Ramsay’s shows. Too much drama and profanities, and not enough food for me. Personally, I just don’t enjoy watching something where every second or third word is a four letter word (okay, that is probably an exaggeration, I’ve never sat down and counted – I haven’t watched long enough to do that). That’s just me. And so as a result, I’ve never purchased any of his cookbooks or tried any of his recipes.

Recently, however, I have seen him in his role as judge on Masterchef US where for the most part it seemed food, rather than the ‘f-word’, was more the focus. So I thought maybe it was time to give Gordon a chance. After all, he’s held onto three Michelin stars for a while, so he must know what he is talking about. I came across his latest book (which accompanies his most recent TV show and is aimed at teaching people how to become better home cooks) for 30% off and after having a quick look, a recipe for meatballs in a fragrant coconut broth with flavours I don’t use a lot caught my attention. There were a few other recipes that also caught my interest which I will try another time. Seeing as it was on sale, and telling myself that even though I have shelves full of cookbooks, I have a blog now so it’s okay to buy another one, I bought it. Link to book here –  Gordon Ramsay’s Home Cooking: Everything You Need to Know to Make Fabulous Food

I know. I have a problem… And I’m running out of space on my bookcase! 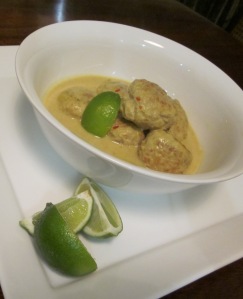 As usual, I made some changes to the recipe along the way to suit my preferences. For example, the original recipe uses beef mince, however I wanted to try it with pork (I just didn’t feel like cooking beef tonight).  I also replaced the onion in the original recipe with spring onion both because I had some in the fridge but also because I thought it would go nicely with the pork and keep it light and fresh. The sweet, spicy broth that resulted really surprised me and I will certainly make this again. The fresh flavours beat anything you get straight out of a jar any day, yet it was really quite simple and straightforward to make.

The original recipe states that it serves 2-4. However, to make it a meal for 4 you would need to serve it with some rice and steamed vegetables.

Meatballs in a coconut broth

Note – you may wish to strain the sauce before serving to remove the spices and lemongrass as the seeds are difficult to avoid.

One thought on “Pork meatballs in coconut broth”